Are we part of the solution or the problem? International E-Waste Day in Romania 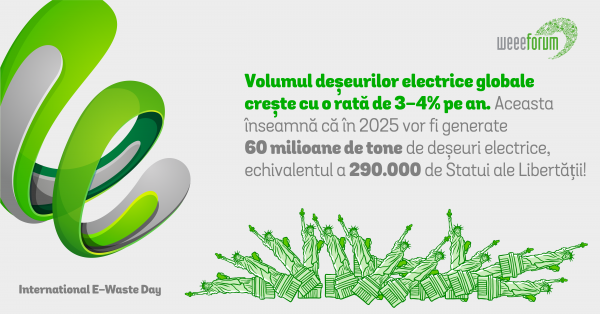 Today, October 14, it is the International E-Waste Day, celebrated in Romania and in 39 other countries around the world. It is the initiative of the WEEE Forum, attended by over 100 organizations from 6 continents. The actions organized aim to make us more aware of the danger posed by electrical waste and to mobilize us to recycle them much more than we do for the time being. Initiatives being undertaken by participant organisations are designed to increase consumers’ knowledge about e-waste and how to dispose of it correctly.

In Romania, this year, on the occasion of the International E-Waste Day, RoRec Association carries out public information and e-waste collection actions in several cities across the country. Also, 10 schools of the Recycling Patrol in Bucharest are calling on their neighbours to support them in a responsible collection of electrical appliances, used batteries and burned bulbs.

By the end of this year, 50 million tonnes of waste electrical and electronic equipment (WEEE) will be generated worldwide. In these 50 million tonnes, our Romanian e-waste is included. We “contribute” to these mountains of harmful waste with every used battery placed in the trash, every electrical appliance is taken out on the sidewalk in front of the block or thrown away instead of being sent for recycling.

Only 20% of the world’s e-waste is recycled every year. The rest, i.e. 40 million tonnes, are stored, incinerated or traded illegally and treated inappropriately. This means that, as they are not biodegradable, they will remain polluting the vital resources of mankind (water, air, soil) even for the next generations.

The International E-Waste Day does not, however, tell us just how serious the situation is, but also that we can do something to change it. A solution would be to make sure that every electrical, electronic or household appliance, which we no longer use, reaches recycling. WEEE Forum has launched a series of infographics and video materials that present both the challenge and the solutions to reduce the amount of WEEE.

We are entering the next stage in Europe’s commitment to foster a circular economy. Karmenu Vella, EU Commissioner for the Environment, Maritime Affairs and Fisheries, explained: “Prevention and dealing with e-waste will be part and parcel of our coming work. This means recycling all our electronic waste where it cannot be avoided. But it also means rethinking the value chain for electronic goods. It means considering their appropriateness for reuse or recycling from conception. It means even going beyond and prioritizing dematerialization and closed-loop systems.”

Pascal Leroy, Director General of the WEEE Forum, said: “From 2019, the minimum collection rate to be achieved annually in EU member states will be 65% of the average weight of appliances placed on the market in the three preceding years, or alternatively 85% of WEEE generated. The new collection targets seek to ensure that around 10 million tonnes, or roughly 20 kg per capita, will be separately collected. Such a high collection rate is impossible to reach without the involvement of all actors in the value chain, including citizens.”

Romanians have the opportunity to show their care for the environment, solidarity with this international cause and responsibility for the future of their children. We have to make a simple but important gesture – to separately collect the electrical appliances, both on the International E-Waste Day, but also for the rest of the time, with the help of the free national collection service.